Nainital is a Himalayan resort town which is 48km from Roshil in the Kumaon region of India’s Uttarakhand state, at an elevation of roughly 2,000m. Formerly a British hill station, it’s set around Nainital Lake, a popular boating site with Naina Devi Hindu Temple on its north shore. There’s shopping in Bara Bazaar, and hiking trails with mountain views crisscross the surrounding area’s wooded hills.
Ringed by the seven hills Nainital (नैनीताल) lies the enchanting and sacred Naini (नैनी) lake. Named after the legend proclaiming that the left eye of Parvati, consort of the Lord Shiva fell here, this is where the Naina Devi Temple now stands. Nainital is also mentioned in the ‘Manas Khand’ as Tri-rishi Sarovar. According to this gatha, three sages, Atri, Pulastya and Pulaha, chanced upon this place while on pilgrimage and feeling thirsty, summoned the waters of the Mansarovar Lake. Today Nainital still retains its religious significance, but has also become a treasured holiday destination for people from around the world. It is believed that the Naini Lake is one of the 64 Shakti Peeths, or religious sites where parts of the charred body of Sati (Parvati) fell on earth while being carried by Lord Shiva. The spot where Sati’s eyes (or Nain) fell, came to be called Nain-tal or lake of the eye. The goddess Shakti is worshiped at the Naina Devi Temple on the north shore of the present day lake. 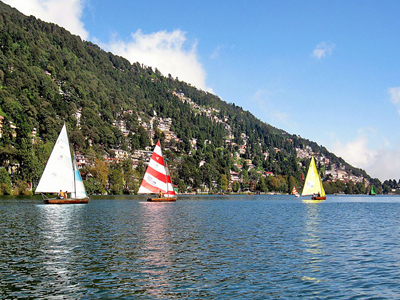 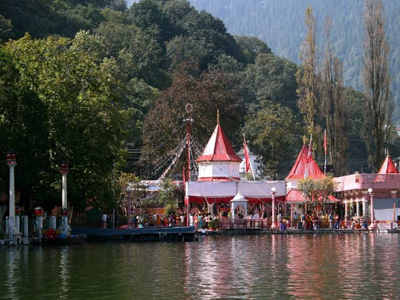