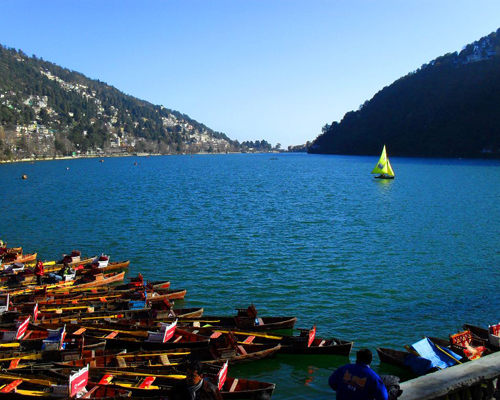 Nainital which is 48 km from Roshil a Himalayan resort town in the Kumaon region of India’s Uttarakhand state, at an elevation of roughly 2,000m. Formerly a British hill station, it’s set around Nainital Lake, a popular boating site with Naina Devi Hindu Temple on its north shore. There’s shopping in Bara Bazaar, and hiking trails with mountain views crisscross the surrounding area’s wooded hills.


Bhimtal (भीमताल) which is 33.5 km from Roshil a town in Nainital (नैनीताल) district in the state of Uttarakhand (उत्तराखण्ड), India situated at an altitude of 1370 meters above sea level and is about 22 kilometers from Nainital. The major attraction in Bhimtal is the Bhimtal Lake which has an island at its centre. Bhimtal is an ancient place named after Bhima of Mahabharata. Bhimeshwara Mahadev Temple, an old Shiva temple in the bank of Bhimtal lake, is believed to have been built when Bhima visited the place during the banishment (vanvas) period of Pandavas (पाण्डव) . 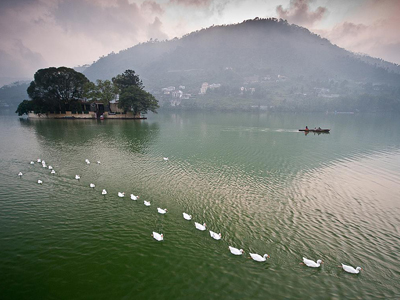 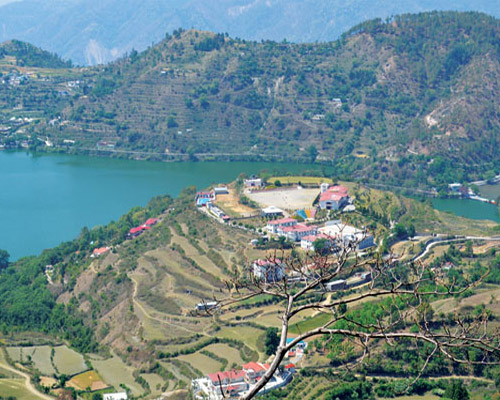 Naukuchiatal or ‘lake of nine corners’ which is 38.6 km from Roshil is a small hill station in Nainital district of the Indian state of Uttarakhand. The lake is 175 feet deep and is situated at 1220 mts above sea level. It is surrounded by hills covered in trees and shrubs.
The lake is situated 4 km from Bhimtal, and 26 km from Nainital, 320 km from Delhi. Nearest railway station is Kathgodam.


Sat Tal (Hindi for "seven lakes") which is 44 km from Roshil is an interconnected group of seven freshwater lakes situated in the Lower Himalayan Range near Bhimtal, a town of the Nainital districtin Uttarakhand, India. During the British Raj, the area had a tea plantation, one of four in the Kumaon area at that time. The lakes sit at an altitude of 1370 metres below lush orchards in the Mehragaon valley. 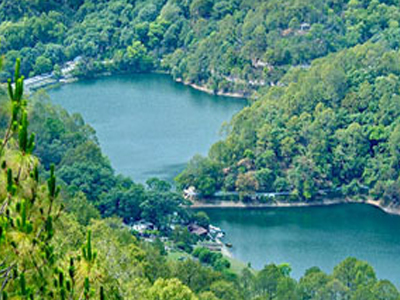 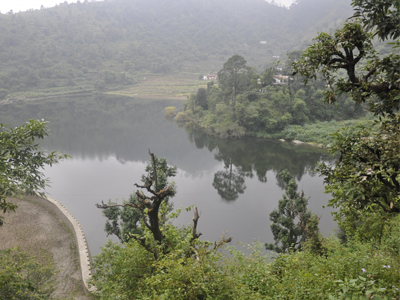 Harish Tal which is 50.9km from Roshil is a Village in Okhalkanda Tehsil in Nainital District of Uttarakhand State, India. It is located 45 KM towards East from District head quarters Nainital.


Jim Corbett National Park, which is 72.2 km from Roshila is a part of the larger Corbett Tiger Reserve, a Project Tiger Reserve lies in the Nainital district of Uttarakhand. The magical landscape of Corbett is well known and fabled for its tiger richness. Established in the year 1936 as Hailey National Park, Corbett has the glory of being India's oldest and most prestigious National Park. It is also being honored as the place where Project Tiger was first launched in 1973. This unique tiger territory is best known as the father who gave birth of the Project Tiger in India to protect the most endangered species and the Royal of India called Tigers. 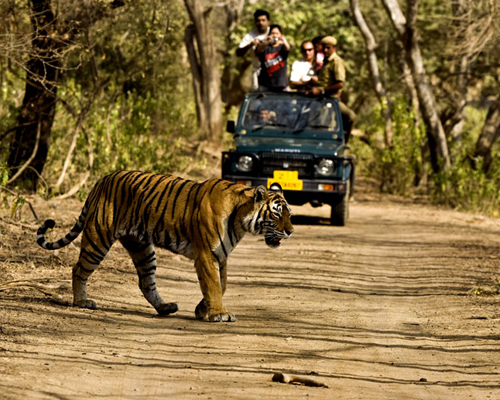 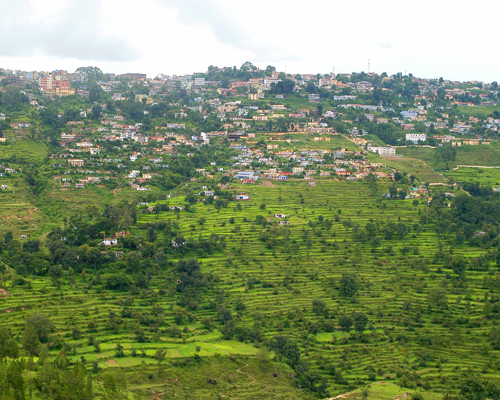 Almora is a municipal board and a cantonment town which is 94.4 km from roshil. Almora was founded in 1568. It is the district headquarters of Almora district It is considered the cultural heart of the Kumaon region of Uttarakhand.
The nearest railway station is Kathgodam 82 km (via Bhimtal), 86 km (via NH 87). Pantnagar Airport is the nearest at 113 km.
Almora is at 29.62°N 79.67°E.[3] it has an average elevation of 1,861 meters (6,100 feet). It is on a ridge at the southern edge of the Kumaon Hills of the Himalaya range. In the shape of a horse saddle shaped hillock, it is surrounded by thick forests of pine and fir trees. Flowing alongside the city are rivers of Koshi, (Kaushiki), and Suyal (Salmale). The snow-capped Himalayas can be seen in the background.


Kausani is located 146 km north of Almora. There are very few places in the Himalayas that can compare with the beauty of Kausani - a picturesque hill station famous for its scenic splendour and its spectacular 300 km-wide panoramic view of Himalayanpeaks like Trisul, Nanda Devi and Panchchuli. Kausani lies atop a ridge at an altitude of around 1890 m amidst dense pine trees overlooking Someshwar valley on one side and Garur and Baijnath Katyuri valley on the other on Almora-Bageshwar-Didihat Highway. Mahatma Gandhi called this place the 'Switzerland of India', due to similarity in landscape. 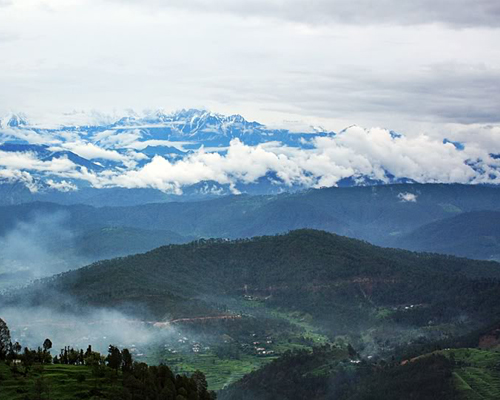 Ranikhet , which is 87.4 km from roshil is a hill station and cantonment town in Almora district in the Indian state of Uttarakhand. It is the home for the Military Hospital, Kumaon Regiment (KRC) and Naga Regiment and is maintained by the Indian Army.
Ranikhet is at an altitude of 1,869 metres (6,132 ft.) above sea level and within sight of the western peaks of the Himalayas.
Ranikhet, which means Queen's meadow in Hindi, gets its name from a local legend, which states that it was here, that Raja Sudhardev won the heart of his queen, Rani Padmini, who subsequently chose the area for her residence, giving it the name, Ranikhet though no palace exists in the area.


Binsar is also a trekker’s paradise. Trekking the salubrious air, amidst the misty mountain trails, towering Oaks. A formation of sleepy hamlets amidst orchards, silver streams and green meadows. The mantle of green hangs all around- rocks covered with unusual moss and ferns, flowers and shrubs – foliage sprouting out of every conceivable nook and corner of the hillside. The entire area is now a sanctuary. 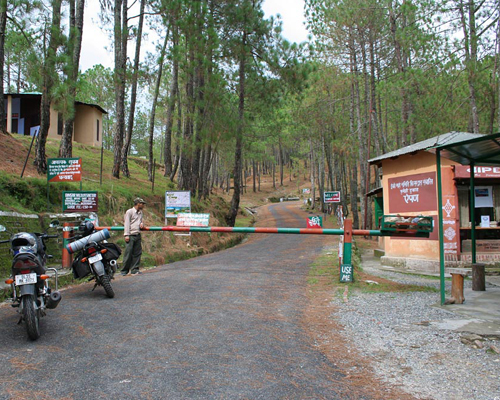 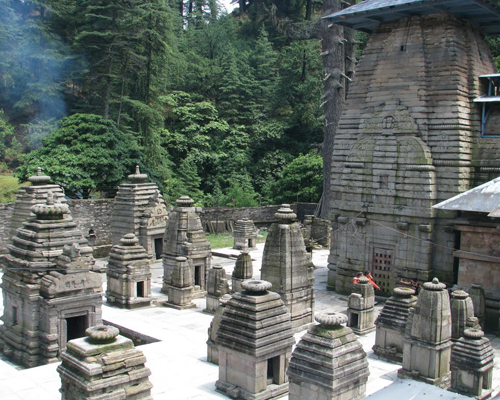 Jageshwar which is 128 km from roshil is a sacred Hindu pilgrimage town in Almora district,there are only two mahamrityunjay temples in India, Jageshwer temple is one of them. It is believed that if the last rites of the person when he dies is takes place here , then his soul attains moksha .
The Jageshwar Monsoon Festival, held between 15 July to 15 August takes place at Jageshwar during the Hindu calendar month of Shravan and the annual Maha Shivratri Mela (Shivratri festival), which takes place during spring has an important place in the calendar of the entire Kumaon region.